About time? Why lockdown-led digitalisation will drive the watch industry forward

Amid speculation about the long-term effects of COVID-19 on the Swiss watch industry, our Client Experience Director Thomas takes a look at one positive impact of the pandemic – as watchmakers seek out new ways to reach customers.

Time moves differently during a pandemic. While some of us are shocked that it’s approaching July already, for others, time has completely stopped. And nowhere was the latter more evident than in Switzerland in mid-March, where workshops fell silent and the iconic Rue du Rhône shut its doors.

But what does COVID-19 mean for Swiss watchmakers in the longer term? This iconic industry has a history of seeing off challenges; and, where the pandemic has led many businesses into the unknown, watchmakers are showing just why they are known for their resilience. Horologists across the spectrum are embracing digital activities and ecommerce like never before, helping them engage with (and sell to) customers who are locked down.

Indeed, experts are optimistic that online sales will be key in driving recovery – so have these transformative times been all bad? As the world’s first and only reverse marketplace for luxury Swiss watches supplied directly to you by brand authorised retailers, we certainly don’t think so!

With economic shutdown seen in markets across the globe, the watch industry has been hit hard by COVID-19. Swiss exports were down more than 80% in April, with production and distribution slowing to a halt; model releases being postponed; the cancellation of two of the watch industry’s biggest trade events (with Baselworld now cancelled indefinitely); and smaller independents left vulnerable.

But despite the gloomy outlook, experts firmly believe the industry will bounce back. This is, after all, a trade that saw off the threat of the “Quartz Crisis” of the 1970s and 80s, and a trade that is still at the forefront of innovation and luxury items. 2019 was a record-breaker, with Swiss exports surpassing $22 billion.

Not only that – some flagship brands have now tentatively reopened their factories after the six-week shutdown, including Audemars Piguet and Patek Philippe. There have even been some new releases: earlier this month Omega introduced their first timepiece with a Master Chronometer certified manual-winding central tourbillon, the De Ville Tourbillon Numbered Edition. To support this recovery, the Swiss government has pledged $61.8 billion in emergency aid.

Another area for optimism is the new online opportunities presented by the crisis. Brick-and-mortar retailers have arguably suffered the most, with store closures and many customers getting more comfortable shopping online. Many watchmakers, who have previously been reliant on store sales, have been forced to adapt – which isn’t necessarily a bad thing.

In an interview with WatchPro Originals, aBlogtoWatch’s Ariel Adams describes how retailers and brands are being compelled to change how they reach customers, and extolls the positives of selling online: “Ecommerce gives you the ability for people to buy their watch when they’re ready”. At Time-to-Find, we can’t help but agree!

In a blog written for WatchPro, Adams emphasised his point: “Many people in the luxury Swiss watch industry are saying, “It’s about time.” The implication is that most of the watch brands would not modernize if not absolutely forced. Now, given an existential threat if they do not adapt, more watch brands than ever have opened up to new realities, new possibilities, and hopefully new ways of selling their products.”

It is not just ecommerce where Swiss watch brands have a chance to shine. With lockdowns in effect across the globe, many consumers are using social media even more and video call apps such as Zoom have come to the fore. Swiss watchmakers that have recognised this opportunity to reach horology fans include Omega, which launched SpeedyTuesday Live on Instagram, and Breitling, which live-streamed a presentation fronted by CEO Georges Kern. Indeed, watch lovers have praised these new-found insights into their favourite brands and the people behind them!

Many of the social media campaigns focus more on people and engagement than the “hard-sell” – for example, following their #TimeWellShared campaign, IWC Chief Executive Christoph Grainger-Herr told the NY Times: “It’s highly inappropriate to overload the world with advertising when people have more important things on their minds. At the same time, people love a bit of diversion. It’s an important part of what a luxury and entertainment company can do.” 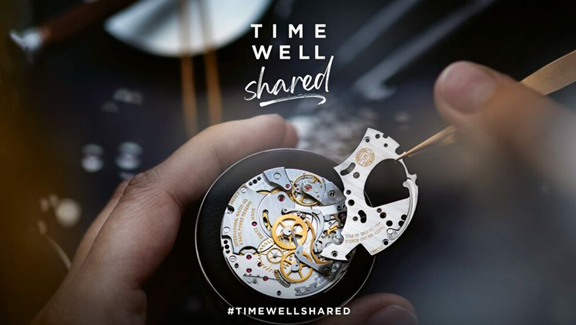 Given the current pandemic, many watch brands have used their online platforms to support communities and health workers – a social consciousness that will hopefully resonate with the brands’ images post-COVID. IWC’s aforementioned #TimeWellShared campaign promoted donations to Save the Children, while Oris gave away 50 watches to front-line workers and “hero” volunteers. One Bulgari factory’s production line has been churning – not with its usual fragrances – with hand sanitizer for medical use in Italy and Switzerland. Meanwhile, Breitling announced a new limited edition of their coincidentally rainbow-colour Superocean Heritage ’57, with some of the proceeds being donated to charities supporting healthcare workers. 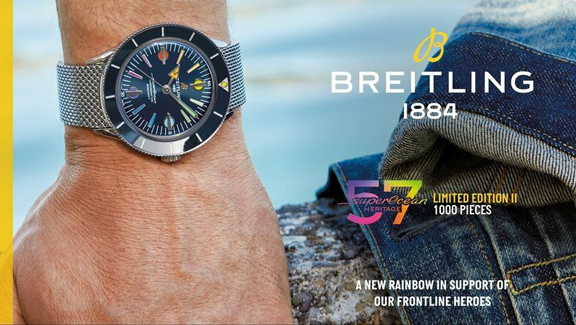 A new age for Swiss watches?

To conclude then, it is clear that COVID-19 will fundamentally change the way watches are coveted, bought and sold. Despite the challenges to global industry, this diversification and move to digital prove that Swiss watchmakers still have much innovation up their sleeve!

“The silver lining is there are a lot of people waiting to celebrate their freedom…from this problem that has affected every corner of the earth. This is exactly the type of scenario that leads to positive increases in watch sales – assuming the brands and retailers know what to do with it!”

At Time-to-Find, our online showroom is ready and waiting, so if you need some escapism or want to compile a wish-list for happier times, begin your search with us today!