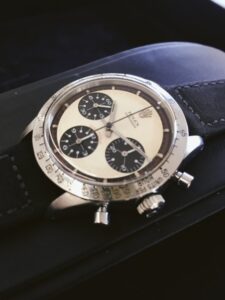 Iconic is a word that is often used too freely, but if there is one watch that is an icon in the world of watchmaking, it’s the Paul Newman Rolex Cosmograph Daytona Chronograph. It is the perfect combination of watch making, motorsport and film star glamour. 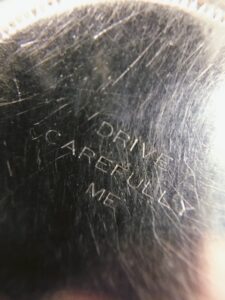 When launched in 1963, the Cosmograph Daytona was not an instant hit. Designed for Motorsport, it was definitely seen as a ‘tool’ watch designed for the racing car driver. But as is the way with such things, one such unique Daytona was purchased by the esteemed Hollywood actress Joanne Woodward for her husband, the equally legendary actor Paul Newman, in around 1968/9 who was beginning what would become and long and significant second career in Motorsport. Paul was cast, along with his wife, as the fictional race car driver Frank Capua in the film Winning. From his role in this film, Paul discovered a passion for Motorsport that transcended the film and led him to his life long success with racing.

His new Cosmograph Daytona featured an unusual and rare white dial listed as an option in the Rolex catalogue as ‘exotic’. This rare dial which features numerous detail changes is now much coveted and through various appearances in film and racing became known as the ‘Newman’ Daytona. These detailed and rather beautiful dials has a number of unique changes in layout, typography and indices and have aged beautifully. For many a Rolex collector, it has become the ultimate Daytona, the Daytona today of course being one of the most sought after Rolex models.

It was a big shock to the watch collecting world when, in 2017, the actual Paul Newman Daytona came to Phillips Auctioneers for sale. This actual watch was being sold by the Newman family with portion of the proceeds going to The Newman Charitable Foundation. 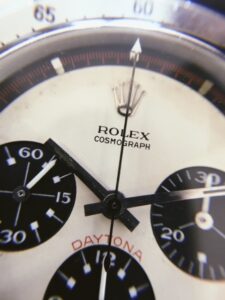 It was an absolute privilege for this writer to actually spend time with this very watch in his hand and discuss its very special aesthetics and attributes and the significant impact on the world of Rolex collecting. 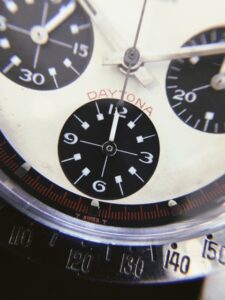